This review will carry some small spoilers for the Sinister Mansion, so if you don’t want that, 8 out of 10.

So, there is no secret in here that I love the Exit games, they were the first “Escape Room” games I tried and my friends and I have played many in the past six months and though we try others the Exit series remains a favourite.

Designed to be single use, and a price point to match, Exit games are designed to be ripped up, torn apart, folded, bent, cut, manipulated and used.

Puzzles will give you three digits that you use a typical decoder disc, and that leads you to whether or not you have the right solution. 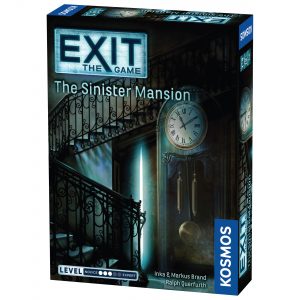 Now the Sinister Mansion is a simple set-up, you get invited to visit a neighbour, and trapped in their mansion, now to escape.

I’ll admit, when presented this one I was a little disappointed just looking at it, 3 Unusual Items, 1 Poster and a 4 Page “book”, from the looks of it, this adventure doesn’t seem to have much with it, certainly not as much as some of the others have, but going through the puzzles all had enough to make up for it.

Honestly, some of the puzzles in this box were imaginative and tricky, to the point we’d kick ourselves after we found the solution.

There were a coule of issues I saw, one was the very first puzzle featured colours, and it wasn’t clear in the printed material if one object was black or brown, which was a point of contention and cost us as a group 5+ minutes.

In fact, that 5+ minutes was the real killer here, we completed the game in 62 minutes (the game is a 1 to 2 hour game play rating) but one of our players immediately took anything above an hour to be failure. 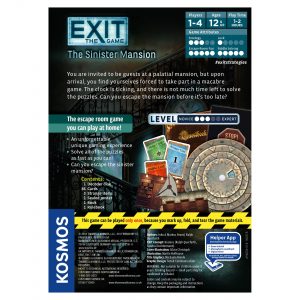 The second of the big issues, there’s a couple of times in the game where we get our solutions spread across three cards, with little indication of which order they should be in, making it just needlessly time consuming to try and enter the right solution.

Beyond those two troubles, this was a good game, definitely the Exit series on form.