This review may (read: will) cover some spoilers for The Catacombs of Horror, if you want to avoid the spoilers, I’m rating this one an 8.5 out of 10.

So, there is no secret in here that I love the Exit games, they were the first “Escape Room” games I tried and my friends and I have played many in the past six months and though we try others the Exit series remains a favourite.

Designed to be single use, and a price point to match, Exit games are designed to be ripped up, torn apart, folded, bent, cut, manipulated and used.

Puzzles will give you three digits that you use a typical decoder disc, and that leads you to whether or not you have the right solution. 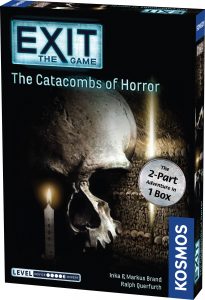 Right, so the Catacombs of Horror has just come out yesterday and we played it last night (the 14th of June), in fact it was so new that we didn’t even find the game on Kosmos’ helper app, which disappoints me a little bit, having some music on in the background thematically appropriate would have been cool, and of course helping to rate the game when done, I should probably do a small review of the helper app, which is a simpe music player, and timer, despite that simplicity it is kind of slow and unresponsive, but small annoyances for something that isn’t needed.

So, The Catacombs of Horror is a new part of the Exit game series, a game in two parts it actually has a portion where you can take a break, pause your progress and come back to it later, it came with two code-wheels, more riddles and a lot more in the way of physical objects, rather than just having tokens and objects made out of card they’re including more in the way of plastic and string and even in this instance a candle.

I’m going to break this down to 3 things, a puzzle I loved, one I didn’t and a major issue as far as our playthrough is concerned.

Of all the puzzles in Catacombs of Horror, I would say my favourite was possibly the picture by M. Chagall, the instructions were so simple, but easy to over-complicate, and though I am loathe to admit it I was the one in this instance over-complicating the solution and it took one of my friends stepping in and finishing it off.

Conversely one of my least favourite featured the photograph of a demon, with instructions to the effect of there being something there that shouldn’t be, we start scouring the photograph, the name, seeing what we can find and nothing, in fact the only thing I can discover is that the demon is named after a popular demon lord, but the name is misspelled, so is that a clue? Actuallly no, no it is not and that mistake cost us some time (but not nearly as much as the next problem)

So, one major issue we had is the order of puzzles, towards the end of the adventure, I’ll see about adding a spoiler tag, so highlight the following text if you want to see this issue.

The main concept of the Exit games, is that you solve puzzles and enter a code according to a specific symbol, it is a basic idea and it works, but the problem here is the “House” symbol, there were riddle cards featuring the symbol as well as the symbol appearing in the “room” pictures, so between two of us we came to the realisation that the “house” didn’t appear on either of the decoder wheels, he did however have a square and a triangle that when put together made the house symbol.

So we both took the code, entered it into both decoder wheels and.. neither solution worked, but when we combined them (the same way we combined the symbols) we got the right solution. This left us with one puzzle left to solve, and no code to get us a final mysterious item to get us to the finale, so what happened?

What happened is this, we had come to the conclusion of the house puzzle too early, and discarded the code that we had used to complete it, when in fact that code should have been used elsewhere first, giving us the final mysterious item and a clue that should have helped us complete the house symbol, but because we had gotten ahead of ourselves we had to take a step back and work out what happened, all in all this caused us to read through too many help cards and waste way more time than really should have spent here, leaving everyone frustrated in the end.

Final thoughts, I am loving what Kosmos have done with their brand, the Exit games can fill a full evening with a pause for drinks or such, I will admit after wasting so much time on the issue above, by the time we got to the final puzzle we were tired, probably a little iritated and I will admit, I was not in the right place to finish the final puzzle.

The Catacombs of Horror has a difficulty of 4.5 out of 5 and honestly it deserves it, the latest releases by Kosmos have all been on the higher side of the difficulty scale, but I am hoping their Two Part games take off so we can get some on the 3 mark (I think the 3 to 3.5 rating is our comfort zone currently, 4 is a push but do-able), I enjoyed it despite our difficulties and honestly, I can’t wait to see what else we get from this developer.