So, recently I started building a Warlock in D&D.

I had complained to a friend that I hadn’t had much chance to play Warlock so when he offered to run a one-to-one Warlock game, I jumped at the chance.

We spent just shy of 4 hours building not only the Warlock, but a specific Patron (future blog on Patrons inbound) and a setting for this Patron.

Long story short, this all got me thinking.

Why are spells so specific?

I mean, I get it, WotC want to be able to sell spell-based cards and it’s easier to do this when everything is specific, but when all your spells are the same as someone elses?

It starts feeling kind of generic.

Let me offer you a little advice.

Fuck Firebolt. (But not the spell itself, this is just an example))

Not that I am opposed to the spell, in fact when I played a Wizard in Curse of Strahd (#baroviabuddies) Firebolt was my go-to spell, but what would make the difference between my Wizard and my Warlock?

Granted, there is one distinction, when you describe the way he spell manifests but that is surely not the only way?

What has bothered me is that the spell doesn’t have elemental counterparts.

Where is the Water Bolt, Lightning Bolt (I see you lvl3 but you’re not the same kind of “bolt”), or even Earth Bolt?

I see it as an issue is that the way D&D is set up, is that spells are set in stone and specific, which feels at odds to when we have spells named after people. 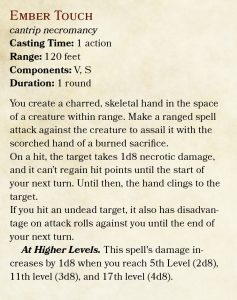 The way we have it currently, the spells are all outlined and defined, but by the very existence of Tasha’s Hideous Laughter, or Leomund’s Tiny Hut indicates that people can make their own spells.

So what did my Warlock do? He freaking flavoured the heck out of his spells.

Chill Touch? Became Ember Touch, with only a little reworking of the description, in fact in this instance I didn’t change anything in the damage, it was just the description.

It’s still a Necromancy cantrip that does necrotic damage, but even then if I were making a thunder based character, there is nothing that is lost from allowing the spell to be flavoured and having the damage type changed, it leaves you with a character that feels unique and special because of it.

Were I involved in making D&D, I would have taken the Firebolt and Lightning Bolts out of the equasion, and given you this instead. 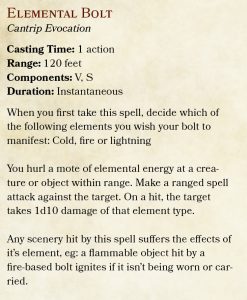 Instead of a specifid elemental spell, as a designer I would have given the players the ability to take a generic “Elemental” and warp it to suit their needs.

If a player wishes to take every potential elemental spell and make them fire based? So be it.

If they want to make each one a different element to spread their strength? You got it.

The only rule I would put in place is that they can only assign an element once, but if they wanted to “learn” the same spell twice to get both a Fire and Lightning Bolt cantrip? I would consider it as a DM.

There is only one danger here as far as I can see (and comment if you have other opinions) and that is in if you forget the original spell, so I’ll tell you how I resolve this for my Warlock.

As we are playing on Roll20, I have taken the name of the original spell and put it in parenthesis at the end of the description, so if I or the DM ever forget what the spell is based on (and to make sure I didn’t cock anything up in the adaptation) so if there is ever any doubt there is accountability in everything, which I think is the only way this works.

So, players, go out and speak to your DM about customising spells and descriptions to make your character feel your own.

And DM’s, let your players make that small tweak to their character to let them feel more epic, and not just something out of a cookie cutter.

We will save talk of creating new spells for the future.